Original Jira :
This would be nice to have - I've got a fairly complex multi-level build setup, with a group of "generic" jobs for each platform we build on. Those generic jobs are then called by each of our 20+ component builds, passing certain information (i.e., what to build, where to find source packages) to the generic jobs as parameters.

Updated bug :
Looking at the BFA change log this is indeed supported as of version Version 1.6.0 (released Mar 10, 2014)
However, testing this with a latest fresh install of Jenkins and an older (Jenkins version 1.625.2) with the minimum amount of plugin installed, I was unable to get this working. I've added several screenshots of the issue :

Here is a screenshot of the master project I have setup :

When I browse to the two executions from this however BFA successfully triggered on the content of the subprojects : 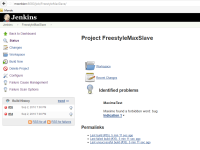 I have tried using different ways to call the sub project as I thought that this could be that, I managed to get the master call the slave project as if they were "Downstream projects" instead of "Subprojects" using different triggers system. Calling them as post-build action, calling them as build action, none of this was able to get the failure cause propagated upstream.