We have a Jenkins job that gets triggered on git push. When clicking on a particular build number, I don't see commit messages of the git commits triggered this build. Instead I see "%B".

What version of command line git is available on the computer running the Jenkins master? 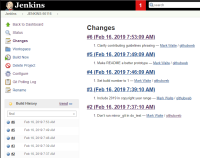 Please provide additional information that will allow others to duplicate the problem you're seeing.

The Freestyle job definition I'm using is attached as config.xml

Some ideas of what might be different between my environment and yours:

I was able to narrow down the search. This problem occurs:

Here is the configuration of this slave:

I tried to cleanup that slave, but of no avail:

Arseniy Tashoyan added a comment - 2019-02-18 07:39 I was able to narrow down the search. This problem occurs: both for Maven and Freestyle jobs configured to run on a specific slave Here is the configuration of this slave:  cat /etc/redhat-release Red Hat Enterprise Linux Server release 6.10 (Santiago)  git --version git version 1.7.1 I tried to cleanup that slave, but of no avail: disconnect the node kill processes of user jenkins remove all files and directories belonging to user jenkins connect the node back
Hide
Permalink

Thanks for the clarification. I appreciate it very much!

You can switch to use JGit as the implementation instead of command line git in many cases and that will provide the correct changes output. There are known cases where JGit does not support a use case that command line git supports. Thus, "switch to JGit" is not always available as an option.

You can install a newer version of command line git on your CentOS 6 machines. See the stackoverflow article for one technique.

You can switch back to Jenkins git plugin 3.9.x and git client plugin 2.7.x. That will remove several bug fixes but gives support for this case with command line git 1.7.1.

After upgrade to RHEL 7 with git 1.8.3.1, the problem disappeared. Thank you for your investigation and help.