Since upgrading a large number (100s) of Jenkins instances to LTS v2.277.2, and the associated plugin updates required for the UI changes, I have observed a number of these instances are leak memory, and in one case it only lasts about 36 hours before exhausting the heap (in that case it is 6GB).

a heapdump (e.g. jmap -dump:live,file=jenkins-20210603-0939.hprof) showed that there were a large number (1000s) of hudson.remoting.Channel classes retained in a list by the class org.jvnet.hudson.test.ChannelShutdownListener. Doing a grep in the installed plugins folder, the only plugin that referenced this class was the gerrit-trigger plugin:

I found it curious that a test class was being included in a production plugin, so I do not know why this jenkins-test-harness is bundled into the plugin.

Uninstalling (or disabling) the gerrit-trigger plugin (and in some cases the sonar-gerrit plugin as well, which has gerrit-trigger as a dependency) and restarting caused this ChannelShutdownListener to no longer be loaded (as evidenced by the output of jmap -histo:live <pid> | grep org.jvnet.hudson.test.ChannelShutdownListener), and the memory profile has remained flat over the past 24 hours.

I have attached a screenshot of the leak suspect from MAT https://www.eclipse.org/mat/

The release notes suggest that 2.34.0 was the release that brought in in the change as part of https://issues.jenkins.io/browse/JENKINS-53250

I don't understand the interaction of this test-harness library and the running system, but it seems to be injecting itself in and causing the leak. If it's just a test harness it should probably be a dev dependency and not included in the main plugin, perhaps it came in by mistake?

Note: It does not appear to matter whether the gerrit plugin in used or not (and in the worst case I mentioned before, it wasn't used at all), so we are working to uninstall it where it isn't needed.

JENKINS-65650 java.lang.NoClassDefFoundError: org/junit/rules/ExternalResource on builds after upgrade to 2.277.4

The unexpected presence of this test harness has been mentioned in https://issues.jenkins.io/browse/JENKINS-65650 .

Just chiming in to say that we're seeing the same thing on 2.291. 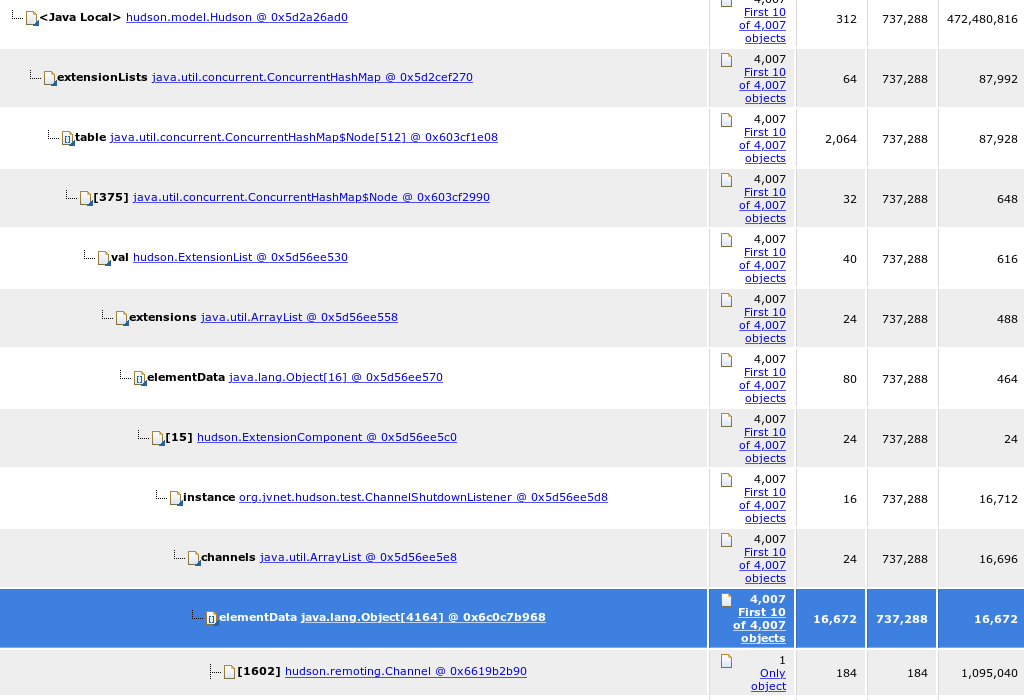 is a similar bug that affects the Cavisson NS-ND Integration Performance Publisher plugin.

Can someone please verify this is addressed? Thanks!

rsandell olivergondza My team was also experiencing this issue, we upgrade to 2.35.0-beta-1 and the memory leak appears to be resolved. Thanks for addressing

James Forsee added a comment - 2021-08-06 15:55 rsandell olivergondza  My team was also experiencing this issue, we upgrade to 2.35.0-beta-1 and the memory leak appears to be resolved. Thanks for addressing

rsandell, Can you please cut a stable release? This memory leak is affecting numerous users.